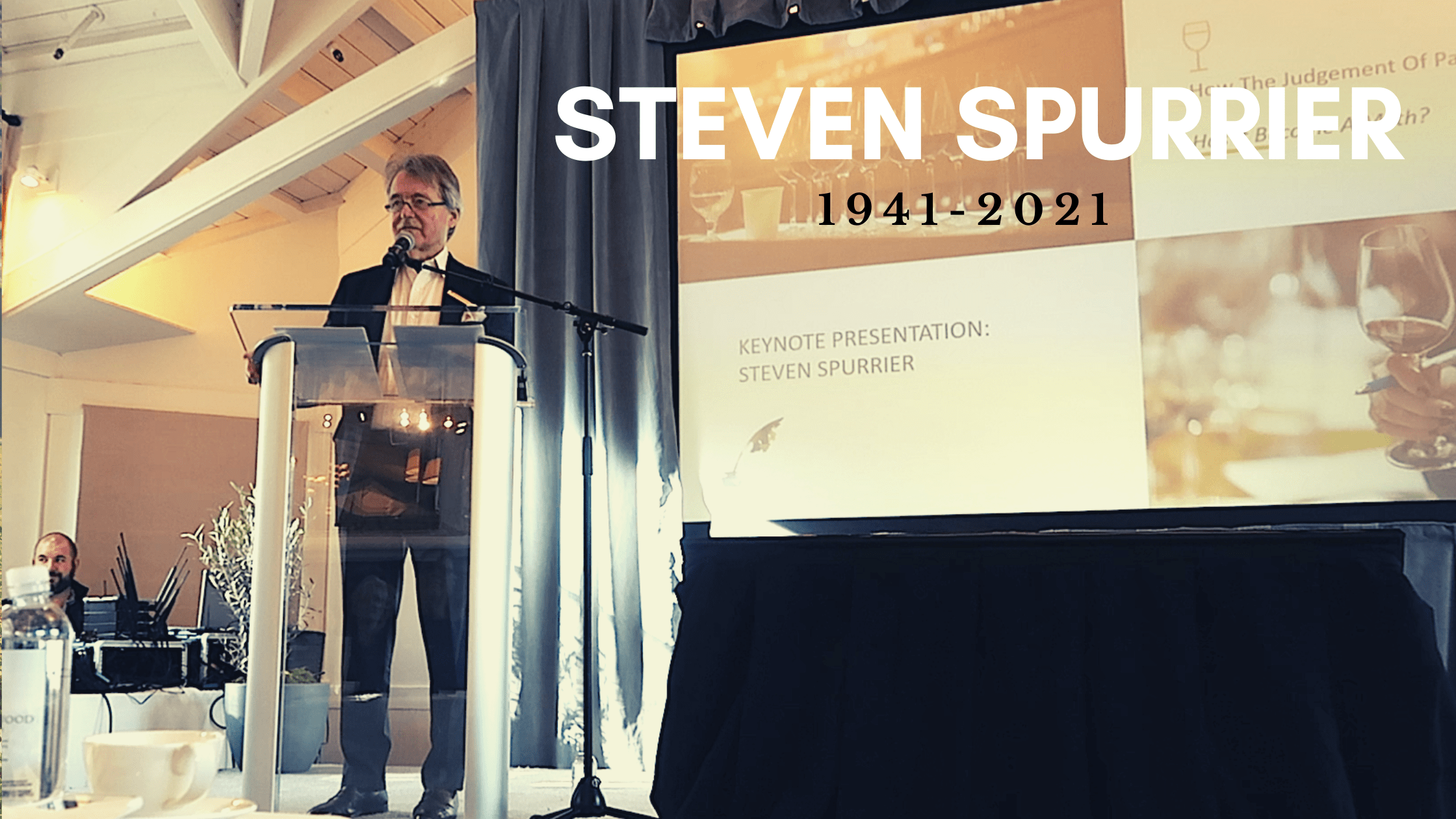 Today is a sad day for the wine world…

The man, the myth, the legend Steven Spurrier has left us. He’s a long-time merchant, wine writer, educator, and subject of a Hollywood film. His ‘Judgement of Paris’ tasting in 1976 put Californian wine on the map.

It’s no secret that I’m not fond of how myself (and other young people in the wine media) are treated by some of the old guards. Mr. Spurrier was the complete opposite of that. I’ve met him around the wine world on several occasions and he was always polite and the consummate gentleman. Never once did he talk down to me or carry an air of superiority or arrogance.

Mr. Steven Spurrier is responsible for two of the most memorable moments in my young wine career.

Back in 2018, we received fellowships to The Symposium for Professional Wine Writers in Napa Valley. Mr. Spurrier was the keynote speaker and guest of the event. During the first evening, the Symposium showed short videos of every person who received a fellowship. One by one, the videos played in front of the crowd.

Instead of a sterile talking head video, I put together an Exotic Wine Travel highlight reel (below) complete with music. In a dimly-lit ballroom, as the video ended Mr. Spurrier turned to us and gave a big thumbs up, complete with a smile. It’s something that I still think about often.

Later that week, Mr. Spurrier hosted a tasting in which he ‘re-created’ the Judgement of Paris with the Cabernet Sauvignons from Napa that he chose back in 1976. It was a tasting of wines both young and old. The prices of Napa Cabernet Sauvignon are through the roof and old vintages from well-known producers are hard to come by. Add this to the caliber of people in the crowd made it the most memorable tasting I’ve been a part of.

The Definition Of A Pro

I met Steven Spurrier again at the Premiere Napa Valley Auction and was blown away by how he carried himself. The morning before the auction, the Vintners of Napa hosted a tasting at the Robert Mondavi Winery. The first tasting on the agenda was a vintage retrospective, a tasting of 2014, 2015, and 2016 Cabernet Sauvignons from 80 different producers.

Mr. Spurrier methodically went through every sample, tasting and writing down notes while answering questions from others in the crowd. I consider my tasting stamina to be high but the tannins from those young Cabernets started to get to me. It was the first time I experienced palate fatigue. Steven never wanted, he tasted through all the samples without breaking a sweat.

Later that year, we met him again at the 2018 Vinistra show in Istria, Croatia. We got the chance to attend another of his tastings and sit down with him over dinner. He was nothing but kind and professional.

His legacy will live on in the wine world. His work can be seen in plenty of places more important than here. But it does warm my heart that he made a cameo on our YouTube channel (at 10:30 in the link below) RIP Mr. Spurrier, you will be missed.