The standard of winemaking is outstanding and several producers are on par with some of the world’s best. Marjan Simčič and Jakončič are no exceptions, these are two wineries that are sure to please even the most discerning palates. Both are located in the Goriška Brda, an extension of the more famous Collio region of Italy (it actually should be the other way around since Goriška Brda has significantly more vineyard space than Collio).

Because of its proximity to the Adriatic, Goriška Brda experiences a Mediterranean climate with significant alpine influence from the Julian Alps. The region sits directly between high mountains and the Adriatic Sea. The marl, limestone, and sandstone soils give wines from this region a distinctly mineral character.

Goriška Brda has become an epicenter of amber wines and minimal intervention production but these two producers are famous for classically-styled wines. Wines from Marjan Simčič and Jakončič will please those used to classic flavors. They are wines that are more readily understandable to most wine enthusiasts.

The wines of Marjan Simčič (pronounce: Sihm-chihch) have received a lot of praise over the last few years, especially from American critics James Suckling and Robert Parker. We don’t always buy into the hype, so we wanted to visit and taste the wines for ourselves.

One of our friends from Croatia told us that these wines are the finest in Slovenia. That’s some big-time praise coming from a country with an already sterling wine reputation. Add that to the 90+ point scores and the bar was set so high for our visit that we were prepared to be let down by the wines.

Marjan Simčič has 18 hectares of vineyards that produce around 90,000 bottles per year. The wines are categorized into three tiers: the entry level, the reserve line named Selekcija, and the Grand Cru line named Opoka. Opoka is the name of the calcium- and silicate- rich type of marl soil. This soil gives the wines of Marjan Simčič (as well as others producers in Goriška Brda) a distinctive mineral character. 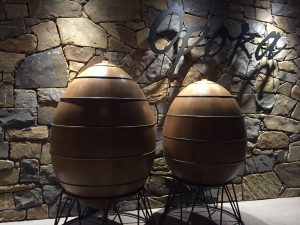 Sitting down and tasting Marjan Simčič’s wines instantly made us believers. Valerija, Marjan’s wife, let us taste through nearly the entire portfolio. It was the first time since Santa Barbara Wine Country that we were impressed with a Pinot Noir.

Both the Selekcija and Opoka versions of Pinot Noir have tight structure and subtle power. The Chardonnay and Rebula from both the Selekcija and Opoka lines are beautiful as well, and the Merlot Opoka drinks well past its price point. All of Marjan Simčič’s wines are well-crafted and retain a sense of place, which is what wine nuts go gaga for. These wines are the real deal and worthy of the high praise.

Aged for one year in large vats and one year in 500-liter barrels, the Marjan Simčič Rebula Opoka is also macerated for four days. Apple, flint, vanilla, and white peach. Round on the palate with excellent oak integration and sandy texture from the barrel. Even though this had skin contact, it acts and tastes more like a classic white wine.   4.6/5

Aged for one year in large vats and one year in 500-liter barrels, the Marjan Simčič Chardonnay Opoka is also macerated for four days. Banana, melon, pineapple, and ripe tropical fruit. Great texture and a long finish. This is a spectacular wine for the tough and rainy 2014 vintage. Like the Marjan Simčič Rebula, it tastes more like a classic white.   4.3/5 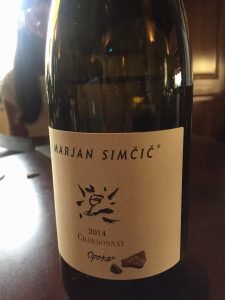 This reserve Pinot Noir from Marjan Simčič is aged for one year in large vats and one year in 500-liter barrels. It’s a rich and ripe Pinot Noir with flavors of strawberry, raspberry, forest floor, and earth. The palate shows a lot of elegance while the acidity is juicy and stretches out the finish. This is a fantastic Pinot Noir anyway you slice it – the beauty of this bottling lies in its subtleties.   4.4/5 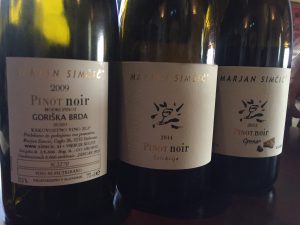 A big Merlot that spent five years in wood. This is dense with a luscious nose of graphite, plum, and dark cherry. The Marjan Simčič Merlot Opoka is full-bodied and highly structured with a long finish and huge tannins. The tannins turned Charine off a bit but there’s no doubt that this is high-quality juice that can compete with Merlot from anywhere around the world.   4.4/5 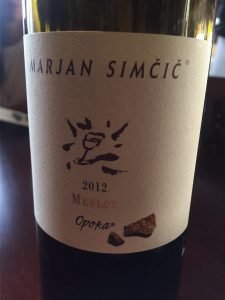 Brothers Aljoša and Mitjia of Jakončič (pronounce Yahk-on-chihch) Winery are producing classically styled wines that are chiseled and balanced. They are carrying on the work of their father Igor Jakončič who headed up a local cooperative winery during Yugoslavian times. Their winery is located on the edge of Kozana. It sits on a ridge and boasts spectacular vineyard views.

Igor Jakončič is in his 70’s, but he is still fit and bright and rides a flashy sports bike. However, it’s Aljoša Jakončič and Mitjia Jakončič who are now running the cellar. Their property includes 15 hectares of vineyards and they produce a little over 90,000 bottles per year—most of which are sold in restaurants. The wines are divided into the basic line and the reserve line Carolina, which is named after Igor’s mother.

During our week in Slovenia, the wines of Jakončič surprised us the most because we hadn’t heard much about them. The winery is famous in Slovenia for their Bordeaux Blend called Carolina Red as well as their entry-level Cabernet Sauvignon, both wines are top sellers domestically.

Sales manager Matjaž Zagradišnik spent the afternoon walking us through the Jakončič’s portfolio. All of the wines showed well, especially the wines from the Carolina line. The Jakončič Carolina Rebula stands out as a clean, crisp expression of Rebula. This wine is perhaps my favorite non-skin contact Rebula along with the Marjan Simčič Rebula Opoka. 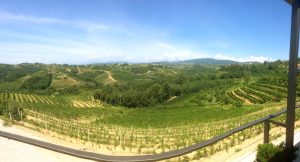 Matjaž also let us taste two vintages of the winery’s top wine, the JakončičCarolina Select. It is a Merlot made in great vintages from old vines that are nearly 80 years of age. The wine is highly coveted and has a waiting list. Recently released vintages of the Carolina Select are 2001, 2006, and 2008.

The Jakončič Carolina Select 2006 is one of our favorite wines of 2017 thus far. A rich, dense, and concentrated Merlot that went through two years of aging in barrel and seven years in the bottle before release.

The tasting was capped off with a bottle of 1986 Jakončič Carolina Belo: a blend of Chardonnay, Rebula, and Sauvignon Blanc that was still fresh after 31 years. It’s always a thrill for us to taste well made, aged white wine. Thanks to Aljoša for opening it for us.

This is 100% Rebula made in the classical method and aged on the lees for two years. Oil, pine, biscuit, and green apple with a touch of oil. Very fine bubbles that persist into a long finish. For an entry-level wine (and especially a sparkler), the Jakončič Mosaic Brut is a remarkable effort. The bead of bubbles is of Champagne’s quality and the wine still retains the flavors of Rebula.   4.0/5 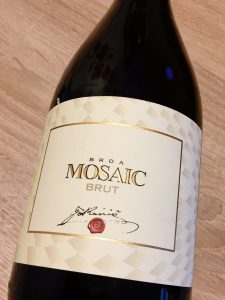 Aged for two years in oak and nearly two years in the bottle. White pear, green apple, fish oil, and the right amount of toastiness. The Jakončič Carolina Rebula is flinty and oily on the palate with a long finish. The texture is great and the barrel integration is seamless. This smells and tastes like Rebula with layers of complexity from barrel aging. This is the first vintage of this wine and it won a Platinum medal at the 2016 Decanter World Wine Awards.   4.4/5

Merlot aged for two years in oak and seven years in the bottle. The aroma of the Jakončič Carolina Select is a killer with graphite, cedar, black cherry, and tobacco flavors. It’s a big wine with a slow and sensual finish. It’s both powerful and elegant on the palate. Bright fruit and fresh acidity, it can stand up to any of the world’s great Merlots.   4.8/5 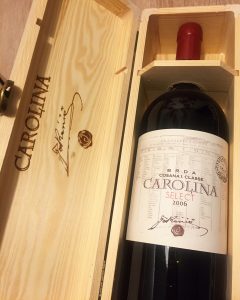 The Jakončič Carolina Bela is a staple label in the Jakončič’s portfolio and 1986 was the first vintage of the wine. A blend of Chardonnay, Rebula, and Picolit. Flavors of elderflower, dandelion, diesel, apricot, almond, and marzipan. Creamy and tangy at the same time. Balanced and big at the same time. A classic, this wine tastes incredibly young and still has a lot of life left.   4.7/5 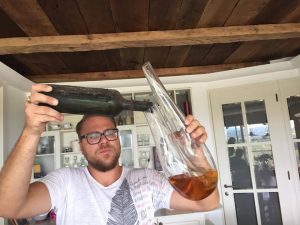 Cover photo courtesy of Marjan Simčič website.
Thanks to Marjan Simčič and Jakončič for their time during a busy part of the year.
The ideas expressed in this article are personal opinions and are not associated with any sponsors or business promotions.