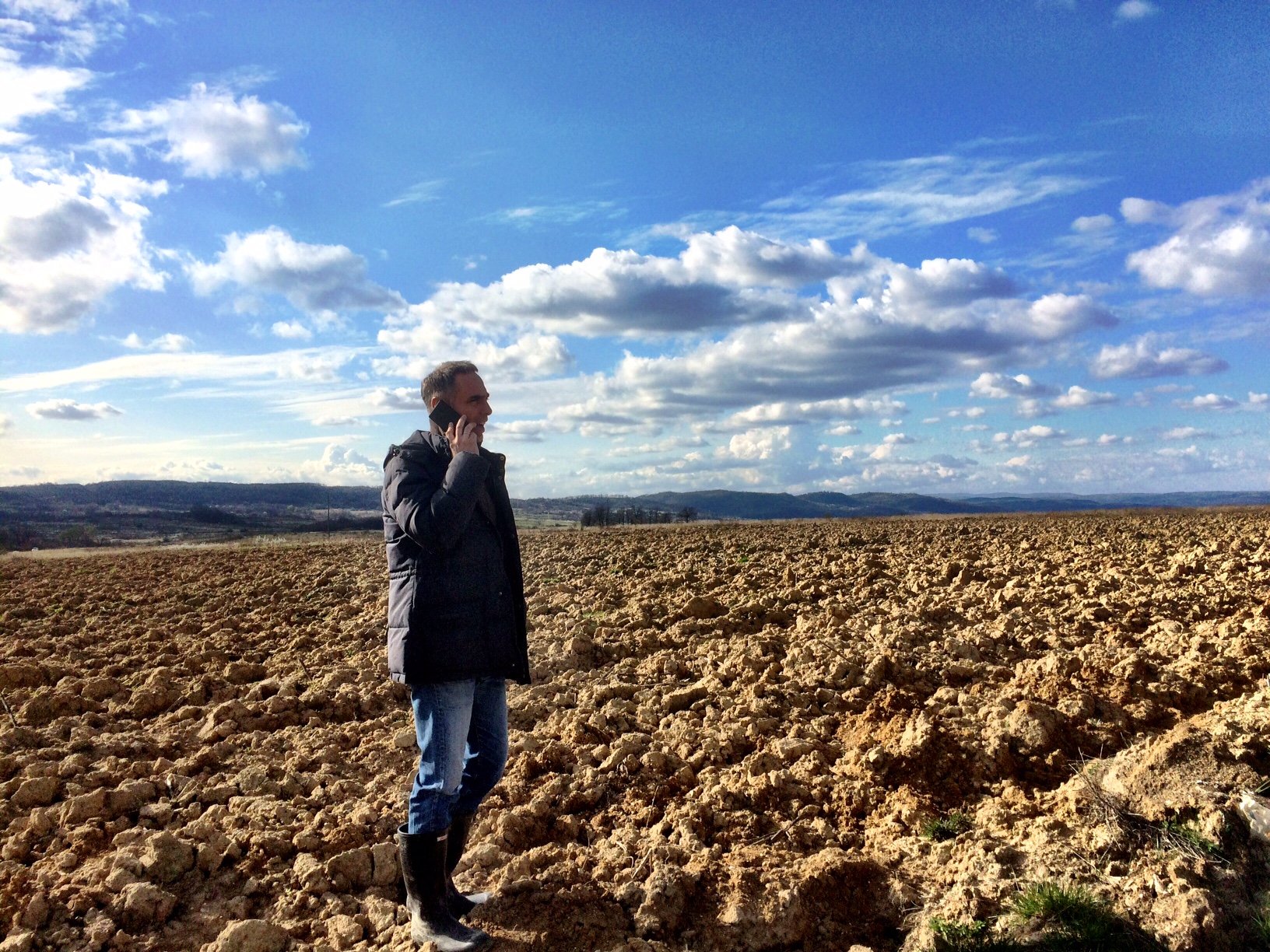 Following Serbia’s wine route has led us to many surprises. Many of the Serbian wines are excellent and show tremendous potential to lift the country onto the world stage of wine. Among those, one Serbian wine region stands out with enviable soil, location, and climate for making world-class wines. In the far east of Serbia, where the hills gently slope towards the Danube river, lies the Rejon Negotinksa Krajina, or more easily referred to as the Negotin region among English speakers.

This region is right by the borders of Serbia, Bulgaria, and Romania. From the vineyards, the great plains of Romania across the Danube River fill the midline of our sight. Negotin is less than 300 kilometers from Belgrade but feels worlds apart. The Southern Carpathian Mountain range creates a geographic barrier between Negotin and Belgrade, perhaps a communication barrier too as it appears no memos on progressions of any sort ever reached Negotin in the past decade or so, as if all the messages have been engulfed by this mountain range.

The vineyards are on slopes and experience true continental climate. The Danube river helps moderate temperature in the winter and the region experiences close to 300 days of sunshine annually. Some regional wine professionals believe that this is the best place to cultivate Serbian Bordeaux blends .

We think Negotin has the potential to be the ‘Grand Cru’ site for Serbian wines!

Our journey to the Negotin region is smooth and scenic. Outside of the main highway that runs down the center of Serbia, two-lane roads snake through the countryside. We experience no traffic aside from the occasional trucks. Our Chevrolet Aveo makes passing on the steep gradients difficult but not worrisome.

The drive to the Negotinske Pivnice is a slightly different story. The small villages of Rajac, Smedovac, and Rogljevo are hidden deep in the region. The villages are less than 20 kilometers from the regional capital, Negotin. Despite the short distance, it’s taking us more than an hour to drive from Negotin to the other two villages as most of the road is single track and unpaved.

The road follows an old rail line that looks completely incapable of existence yet is still in use. Slow, single-car passenger trains traverse the route dropping off a handful of passengers at each tired woodshed that serves as the station.

The villages look almost abandoned. According to official data, each of them has 180 registered inhabitants. But all we are seeing so far are a handful—literally countable by two hands of fingers—of people including an elderly couple who look over 80 years old, riding their tractor across a field. Many of the houses look like they’ve been left empty for a long time.

Despite how bleak the area looks, our research indicates that we are on the right track. This is exactly where the golden age of winemaking goes back to the 3rd century AD, when Negotin and the rest of Serbia belonged to the Roman empire. Even in the late 19th century, wines from here were drunk and known in Bordeaux. In the more recent history, the Yugoslavia’s socialist era forced all the grape growers to send their harvest to large, state-run co-operatives where quantity, not quality, was the focus. After the collapse of Yugoslavia, many people simply left the villages.

If great wine was once made here, it is logical to believe that it can be made again.

Each of the three villages contains hundreds of old “pivnice“, the Serbian word for “wine cellar”. Many of them are abandoned, but we managed to find a few active places. One of the cellars is run by a young man who lives in Belgrade but returns to make wine at the homeland of his ancestors during the winemaking season.

This entire area of Negotinske Pivnice is currently in the application stage for the UNESCO Heritage Sites list. The massive scale of these cellars shows the importance of viticulture in this area in the past. It looks like every single household here used to make wine. According to some literature, there used to be over 2,000 hectares of vines and around 300 active wineries, distilleries, and cellars here. Today, there are around 20 hectares of vineyards, less than 200 structures, and a speculated number between 20 to 60 cellars and wineries left.

In our video below, you can see how beautiful and haunting the cellars are.

We wonder if these three villages were located in a more heavily trodden country, would it be a big-time tourist attraction by now. Our hope is that this area regains some of its former glory so these cellars will not be lost forever. And there is indeed a faint glimpse of hope for the villages.


New Wines on the Block

There are two fairly young wineries looking to restore confidence and glory to the area. One of them is Vinarija Raj, owned by a couple, Beka and Mick O’Connor. Mick is British and his wife, Beka, is from Serbia. Their winery is next to the train station of Rajac. Vinarija Raj is located in a crumbling building, which is in the process of getting remodeled and fitted with top-notch winemaking equipment.

The most exciting discovery for us is the Raj Crna Tamjanika 2015. The wine is made from Crni (black) Tamjanika, an indigenous variety hardly used for vinification today; so drinking this wine for the first time is a diary-worthy moment for us. The wine has flavors of forest floor, cedar, and blackberry. The acidity is high. The finish is long, slightly bitter, and gently tannic. It reminds us of a well-made Dolcetto from Piedmont, Italy.

While Raj is trying to restore glory to Rajac, a French couple is looking to revive the nearby village of Rogljevo. Cyrille Bongiraud and Estelle Germain relocated from Burgundy to Rogljevo in 2007 and established Francuska Vinarija, a name that aptly translates to “French Winery”. As a renowned soil specialist, Cyrille was drawn by the limestone soils of this area when he first visited in 2003. Now, Francuska Vinarija works with local grape growers in Rogljevo on seven hectares of small-plot vineyards.

An upcoming documentary entitled The Promise, which chronicles their journey, will be released soon. You can watch the trailer below.


Did You Say Serbian Grand Cru?

There is one producer in this region who is already capturing the wonderful terroir successfully. Nikola Mladenovic was working as an engineer in Belgrade before he decided to go back to his roots in Negotin to start something new.

The result is the Matalj Winery. Nikola teams up with a young, superstar Serbian winemaker Mladen Dragojlovic for the work at Matalj. With a portfolio of single-vineyard wines made from Chardonnay, Sauvignon Blanc, Merlot, Cabernet Sauvignon, and Crni Tamjanika, Matalj is already creating quite a stir in Southeast Europe and at regional wine competitions.

The Matalj wines are in such high demand that when we visited Nikola, he did not have a single bottled wine left in his winery. However, our visit was anything but futile; we got the chance to sample many wines from the tanks and barrels, including his excellent dessert wine made from Crni Tamjanika. Nikola is a vibrant and open-hearted guy. The entire afternoon in the Matalj cellar and vineyard went by quickly in his good company. After many hours of getting to know the story and wines of Matalj, we had dinner at a nearby restaurant where Nikola had to buy back his wines for us to sample. Unfortunately, the crown jewel was nowhere to be found; it seemed the entire town had run out of his best-known wine.

The most sought-after wine in Serbia is the Matalj Kremen Kamen. It is made from Cabernet Sauvignon and a tiny touch of Merlot; the grapes are sourced from Nikola’s Kremen vineyard. The production is less than 5,000 bottles in a good year. This wine is so popular that it is virtually out of stock everywhere in Serbia.

As serendipity always rewards the persistent heart: our friend managed to help us track down a bottle in Belgrade. The bottle we got was the Matalj Kremen Kamen 2011. Here’s our tasting note:

The epitome of power and grace. As it breathes, the aroma constantly changes around the predominant characteristics of black fruit, plum, violet, tobacco, leather, and a touch of vanilla. Perfectly ripe fruit notes on the palate—yet not heady or full-bodied—held together by a persistent mineral backbone. The end palate is ridiculously long and the tannins are round and powerful. They slide down your esophagus into your stomach and continue to flutter, as if to remind you that they are still there. This is a stellar wine that can compete anywhere in the world.

We are not alone in our sentiment. Our friend Daniel Curovic is of Croat descent and is importing Croatian wine to Sweden. When we met, he told us, “I tasted the Kremen Kamen and it might be the finest wine coming out of the entire Balkan area.” We’ve spoken with several other wine critics and writers who also expressed similar thoughts about this wine.

While wineries are springing up like mushrooms after the rain in the rest of Serbia, the growth in Negotin has been sedated. Perhaps the area is too isolated? Perhaps nobody wants to live in the area? Whatever the reasons may be, we look forward to keeping our eyes on this exciting corner of the wine world. With the charming remnants of a glorious winemaking past and the current few but top-notch wines being made in Negotin, the future may be brighter than one might expect.

You May Also Enjoy
Fine Serbian Wine on Belgrade’s Doorstep