Skip to content
You are here
Home > As Drunk By Exotic Wine Travel > San Leonardo: A Northern Italian Wine Classic 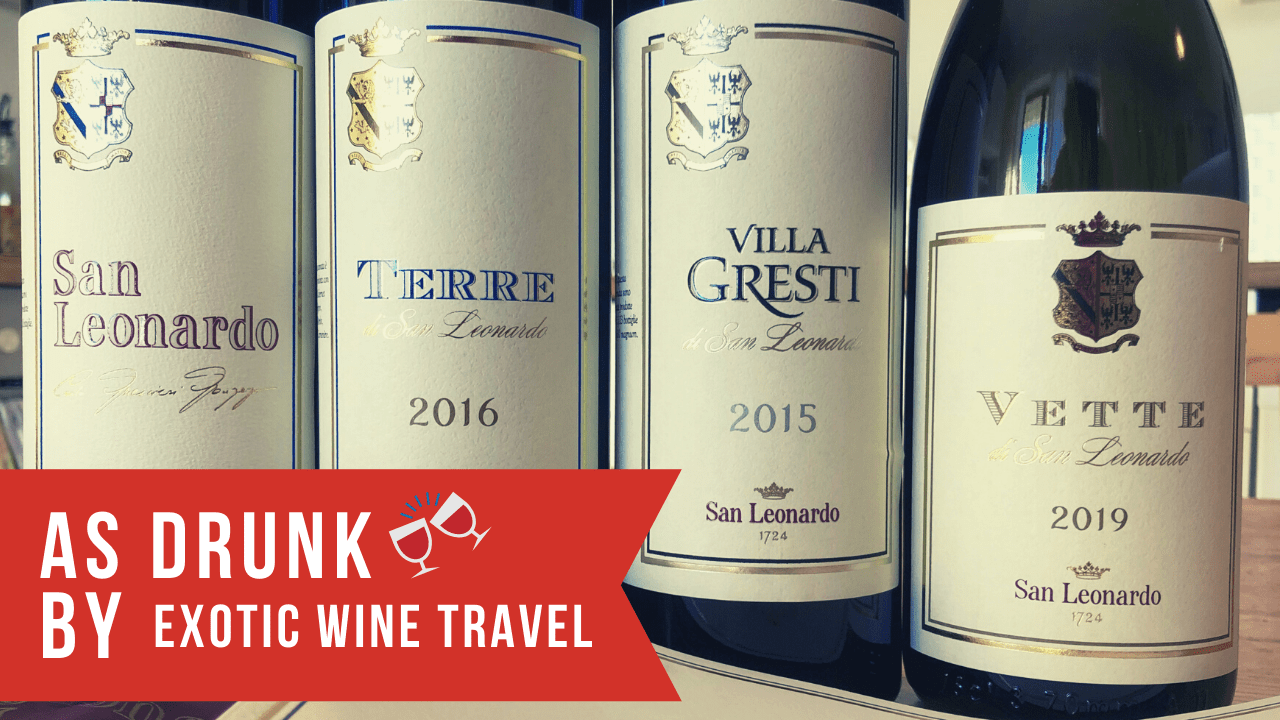 There are a handful of Italian estates that are truly legendary. Many of them are located in Tuscany or Piedmont. But in Northern Italy, in an appellation that isn’t renowned for fine wines, Tenuta San Leonardo makes magic happen.

Located in Trentino, Italy the estate dates back to the 19th century but San Leonardo’s modern history began in 1974 – when the present owner Carlo Guerrieri Gonzaga took over. The estate took on the late Giacomo Tachis as a consultant (creator of famous Italian wines like Sassicaia, Tignanello, Solaia, and Saffredi) and in 1982 the first Tenuta San Leonardo, San Leonardo was born.

While there have been ebbs and flows in wine styles and markets over the last few decades, San Leonardo is famous for never wavering. Carlo Guerrieri Gonzaga never wanted to make big, fruity, blockbuster wines. This is seen in the current vintage of the flagship San Leonardo, which is a Bordeaux blend coming in at 13% alcohol by volume.

It’s a wine that has been on my list for a long time. In the world of fine wine, producers with this type of pedigree and track record usually come with a hefty price. That’s not the case with San Leonardo. Their flagship wine can be found worldwide for around 60 USD. Unfortunately, I just never got around to taste it, until now.

The secret recipe to the estate is Carménère. Which is blended with Cabernet Sauvignon and Merlot in the flagship San Leonardo. All of the wines I tasted are not for those who want the big and bold. These are earthy Bordeaux blends with nuances you must pay attention to. They are built for aging in the cellar, some people accustomed to fruiter wines might even find the wines from San Leonardo to be austere.

While the flagship San Leonardo is outstanding, I was personally blown away by the latest vintage of Tenuta San Leonardo, Terre. It’s found around the world for around 15 USD and is something worth picking up by the case. Here are the latest releases from San Leonardo.

The Tenuta San Leonardo, Vette is 100% Sauvignon Blanc that only saw stainless steel. It’s an unmistakable representative of the variety with notes of cut grass, kiwi, rockmelon, and green apple notes. It’s crispy and fresh with sharp acidity. After a few days of being opened, it really started to round into form, becoming fuller in body. Score: 90/100

The Tenuta San Leonardo, Terre is the little brother to the flagship San Leonardo. It gives a preview of its big brother as it is released earlier. It’s a blend of Cabernet Sauvignon, Merlot, and Carménère in a 60/40/10 proportion. Most of the cuvée is aged in concrete while 20% is aged in oak.

Generous nose of cherry, black raspberry, capsicum, and tobacco. This wine punches way past its price point. There’s nothing second class about this. The perfect balance of fruit, savory notes, while being firm and not overly big. Chewy tannins. A savory, earthy red, not a fruit bomb. Buy this by the case. Score: 91+/100

The Tenuta San Leonardo, Villa Gresti is a softer, right bank Bordeaux styled blend of Merlot and Carménère aged for 12 months in new French oak. Notes of chewing tobacco, black cherry, earth, graphite, and a kiss of oak. This isn’t a big, brooding monster. It’s classy and understated, yet still layered. The wine is more savory upfront and the acidity stretches out the palate. Refined, small-grained tannins guide the long finish – which is the highlight of this wine. Give this another ten years in the bottle to put on some weight and round out. Although this is a right bank blend, it tastes to me more like a left bank Bordeaux. Score: 92+/100

The Tenuta San Leonardo, San Leonardo is the legendary wine from this estate. It’s a blend of Cabernet Sauvignon, Carménère, and Merlot made only in the best vintages. This is earthy and smells like true Bordeaux. To me, it has all the qualities I want in a great Bordeaux blend. Notes of capsicum jump out of the glass first. The fruit includes mulberry, black cherry, and black raspberry. There’s plenty of tobacco and vibrant acidity here. It’s a medium-bodied, age-worthy wine that should do wonders in the cellar. Chewy tannins and a long finish, this is serious stuff. Score: 95/100

You can find out more about our scoring system on the WINE RATING page.

Tenuta San Leonardo provided tasting samples. The opinions expressed in this article are unsolicited and have not been paid for in any way by governmental bodies, enterprises, or individuals. We do not sell editorial content as that would destroy the legitimacy of our reviews and the trust between Exotic Wine Travel and its readers. On occasion, we extend the option of purchasing the wines we review or/and the products we spotlight. Some of these product links are set up through affiliate programs, which means Exotic Wine Travel gets referral credits if you choose to purchase these items via the links we provide.