Skip to content
You are here
Home > Wine Education > Why You Smell What You Smell: Understanding Wine Aroma with Richard Pfister 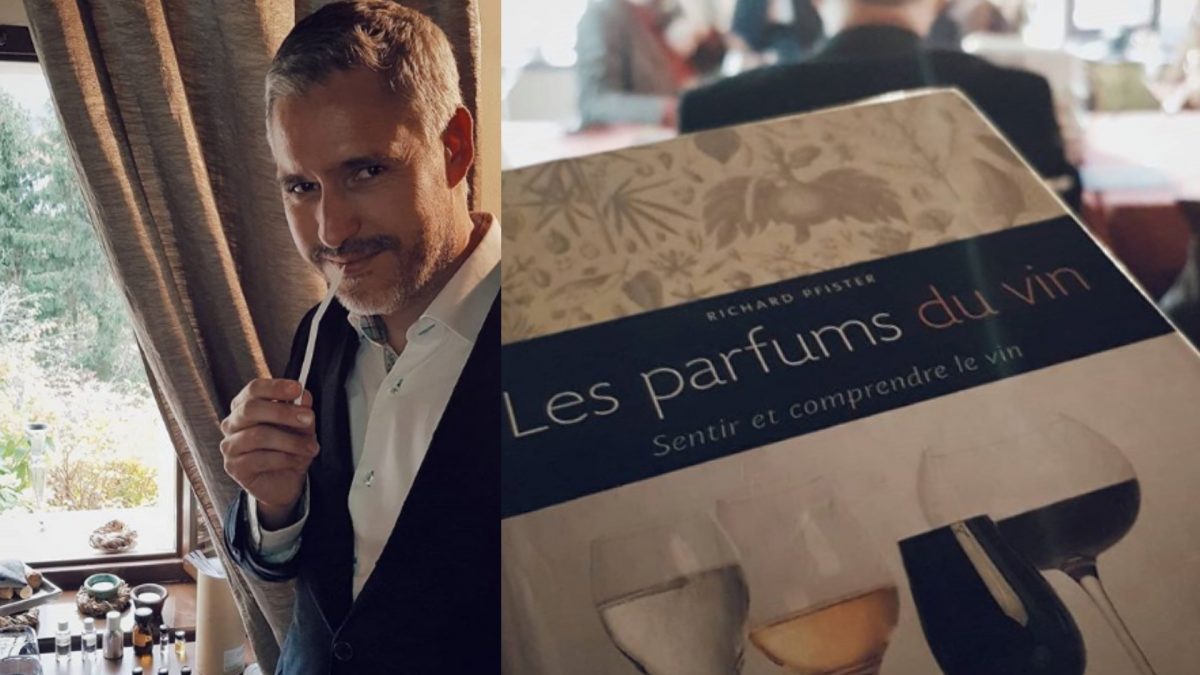 Grape is one of the oldest and most important horticultural crops. Grape has also long been of cultural and scientific interest. However, it is only in recent decades that researchers have begun to elucidate the genetic mechanisms behind the biosynthesis and metabolism of volatile compounds in grape. These volatile compounds form the bedrock of wine aroma, which is a key determinant of wine quality.

The aroma of wine is made up of hundreds to over a thousand aromatic molecules belonging to different families such as terpenes, esters, and thiols. Despite the complexity, sensory analysis remains the most efficient approach to aroma and wine quality control because a trained human nose can detect compounds at concentrations that cannot be detected by technology.

Notwithstanding their importance, wine aroma, its composition, and its evolution during the winemaking process are still poorly understood. In this regard, I speak with Richard Pfister, an enologist who specializes in sensory analysis. Touted as the world’s only ‘enoperfumer’, his specialty is engaged by wineries from all over the world—from his motherland of Switzerland, to France, Spain, Chile, Georgia, Kazakhstan, Moldova, Romania, Russia, and Ukraine.

IN CONVERSATION WITH RICHARD PFISTER

Richard Pfister is an engineer in enology and viticulture, a wine and sensory consultant, the Scientific Secretary of the OIV Award Jury, an international wine judge, an OIV and VINOFED observer, the editor of Swiss viticultural and enology magazine Objectif, and a council member of the Fondation Internationale des Sciences et Culture de la Vigne et du Vin (FISCVV) in Switzerland. He also teaches at Changins School of Viticulture and Oenology in Switzerland, the Institute of Vine and Wine Science (ISVV) at the University of Bordeaux in France, and the AgroSup Dijon School of Agronomic Engineering in France.

AN OLFACTORY PERSPECTIVE ON WINEMAKING

What does olfactory consulting entail?

Thanks to my perfumery training and regular collaboration with wine researchers, I can detect not only aromas but molecules. The sensory identification of molecules can help wine producers to avoid defects and enhance positive notes in wine. I also help wine producers to recognize the characteristic molecules of different woods, including oak, in order to best capture the aroma potential present in their grapes.

In the vineyard, I help viticulturists to maximize varietal aromas and avoid precursors for unpleasant ones. One way to achieve this is through canopy management. For example, in hot climates, protecting grapes—especially sensitive varieties—against excessive sun exposure is crucial; promoting water and nitrogen transfer from the soil to the vines, as well.

To ensure sustainable results and the internalization of effective techniques, I offer in-house capability development by training winemakers, researchers, tasters, and wine professionals to discern common wine aromas and molecules.

In some up-and-coming wine countries, I work with the public and private sectors to understand the aromatic characteristics of indigenous grape varieties.

What influences the development of aromatic molecules and their concentrations?

Let’s talk about wine made with whole-bunch fermentation. Can you really ‘smell the whole bunch’ in wine as some people claim?

What are some common stress-induced off-aromas?

There are several stress-induced molecules. The main one is 2-aminoacetophenone, which can produce pleasant and unpleasant notes in wine. This molecule can create notes of linden, hawthorn, mothball, hay, and beeswax. It can also impart astringency in wine, and it is one of the reasons for premature oxidation in wine.

Does soil type have an independent effect on grape aroma?

Yes, of course. But we are unable to directly link specific aromas to specific soil types. For example, chalk soil will not produce a chalk note in wine. That’s because the roots can transfer ions, such as Na2+ and K+, from the soil to the grapes but not aromatic molecules.

How has climate change affected your scope of work?

Beyond the riper aromas that many people have observed, climate change affects many other things in vineyards and winemaking. For example, the acidification of soil will promote the activities of yeasts and bacteria, which can lead to more off-aromas. Another example: the vines have less water during veraison and capture less nitrogen. This condition will also produce precursors for off-aromas, which will be revealed during alcoholic fermentation.

“A person’s sense of smell is like a fingerprint. It is unlikely that two persons will perceive a molecule the same way, and even less so when they approach the totality of an aromatically complex beverage like wine. “

Having attended one of your presentations, one of the biggest takeaways for me was that on a molecular level, blackberry is ‘related’ to lily, even though blackberry is a fruit and lily is a flower. How does this ambivalence make sense?

It’s unlikely to find the exact smell of lily or blackberry in a wine. However, one or a few molecules can evoke the impression of blackberry or lily. For example, if the molecule methyl anthranilate is present in a wine, some tasters will think that they smell lily, blackberry, or both. Understanding molecules make it easier to understand each other.

“Understand each other” is a recurring message in your presentation. I appreciate your emphasis on understanding other tasters and taking an empathetic approach when tasting with people. Tell me more about the neurophysiology of smell and the differences between individuals.

Everyone’s nose receptors, which are on the surface of the olfactory epithelium, are positioned differently. A person’s sense of smell is like a fingerprint. It is unlikely that two persons will perceive a molecule the same way, and even less so when they approach the totality of an aromatically complex beverage like wine. In addition to that, the way each brain treats olfactory information is completely different due to the process of perception and recognition. Besides the differences in neurophysiology and references, people also verbalize their impressions of sensory experiences differently.

Adding to the complexity is the fact that there are many aromas that can smell like each other. For example, ginger and lemongrass are similar because they both contain the molecule geraniol. This explains why when a taster smells ginger, the other detects lemongrass. They are both communicating their impressions of geraniol but expressing it differently. It is therefore understandable that tasting notes of the same wine are never identical.

To further illustrate this complexity: an aroma consists of one or more molecules, sometimes several hundred. When we recognize the smell of rose in a wine, it indicates that we have spotted one or more molecules of rose in the wine. That means all the aromas that one detects in a wine are never exactly identical to those of nature. It’s the work of a few molecules that causes our brain to associate the aromas with previous experiences and help us to put descriptors on what we are sensing.

In your book Les Parfums du Vin, you have 152 wine aromas classified into nine major dominants. How is it different from other wine flavor charts? How can tasters use it optimally?

In the book, each of the 152 aromas is described with its main molecular components and other similar aromas. This description helps readers to better understand why they come to certain conclusions about certain aromas.

Most wine flavor charts categorize descriptors based on olfactory similarities. For example, the smell of mushroom is earthy. However, many smells, both in pure molecular form and in complex natural odor form, belong to several groups, because they evoke various odorous images depending on individuals. For example, the aroma of narcissus is floral just as it is animal-like, because of the presence of para-Cresyl Phenyl Acetat. The Classification Œnoflair found in my book, Les Parfums du Vin, circumvents these ambivalences as the classification is made according to the nature of the objects. Blackcurrants and gooseberries are classified in the berries not because they smell like berries, but because they are berries.

Since we all have different olfactory receptors, physiological influences, and psychological references, it is rare that tasters can agree on specificity when detecting aromas. This classification facilitates the description by guiding the taster to choose one or two dominants, before the choice of families, then the final descriptors. It is important to follow a structure when tasting, so we are able to better remember the sensory aspects of wine. This systematic way of thinking and identifying aromas is one way to develop olfactory abilities and memorize olfactory sensations. It is also important to visualize the aroma. The image helps to fix the smell in the brain.

So the degree to which wine faults are considered problematic often lies in the nose (and palate) of the beholder?

Sort of. Not all volatile compounds contribute equally to the smell of a wine. Their impact depends on their concentration and the human’s detection threshold, which is the lowest concentration of a particular compound that can be detected by the nose. Because of the variability in our sensory receptors, each individual has a highly personalized range of sensitivities towards various volatile compounds. The concept of sensory threshold needs to be used with caution when describing wine. Both synergistic and antagonistic effects can occur in olfactory perception. Sometimes, a mixture of compounds can be detected on the nose even when all of them are below the sensory threshold. Other times, some compounds can mask the perception of other compounds, so they remain undetected at high concentrations.

Disclousure:: On occasion, we extend the option of purchasing the wines we review or/and the products we spotlight. Some of these product links are set up through affiliate programs, which means Exotic Wine Travel gets referral credits if you choose to purchase these items via the links we provide.